What do 360-Degree Surveys assess?

A 360-Degree Survey is a questionnaire that assesses a candidate from multiple angles, asking the opinion of not only the candidate themselves, but also people who work alongside them (peers), under them (direct reports) and above them (their line manager) within an organisation. The Coaching 360-Degree Survey is specifically geared for senior leaders, providing an in-depth analysis of observable behaviours, allowing a coach to gain an understanding of the individual’s strengths and development needs, how they are perceived in their organisation, and what they would need to do to improve their relationships, decision-making and performance. To help the coach, the top & bottom 5 rated behaviours are presented on a separate page in the report to quickly identify feedback patterns.

Typical roles that would use our coaching 360-degree survey are:


Overview of the Coaching 360-Degree Survey

Our coaching 360-degree survey presents candidates and their raters with 20 short statements about the candidate’s behaviours. They are then invited to rate the performance of the candidate, with answers ranging from ‘Very Poor’, to ‘Poor’, to ‘Neither Poor Nor Strong’, to ‘Strong’ to ‘Very Strong’, as well as recording the change in performance, whether the candidate has grown ‘Stronger’, ‘Weaker’ or shown ‘No Difference’. Additionally, raters and the candidate are given an opportunity to comment on both the strengths and development areas of the candidate.

Our 360-degree survey measures 4 competencies related to the success of a manager or leader:

1. Relating to Others - Building relationships across an organisation to communicate fluently to colleagues and stakeholders

3. Managing Performance - Working in a systematic and pragmatic manner to surpass performance expectations for oneself, one’s team and the business 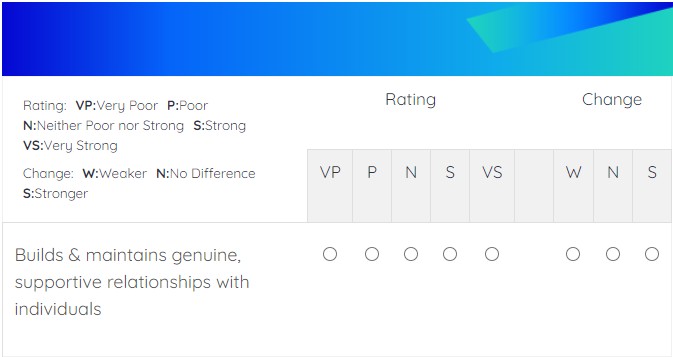 How to do well in your Coaching 360-Degree Survey

To do well in a 360-degree survey, it is good to implement the following tips…

2. Be honest – As you will not be the only person rating yourself, try to be as honest and transparent as possible when answering the questions, or else your results may result in large discrepancies between how you see yourself and how others see you.